Hi Everyone!  Some of you had reached out and requested this recipe after watching my Instagram Story (RPTrainer425 for those of you looking to tune in).  So Here it is…

1 lb. of Ground Beef, Turkey, Chicken or Bison  (Note:  I used 80% Ground Beef in my peppers because I am on a ketogenic diet – high fat, low carb, moderate protein.  If you are on a high protein, moderate carb/fat diet, you may want to choose a leaner meat such as Chicken, Bison or Turkey, or even a leaner ground beef.  All of these work, but it really just depends on your diet.)

1 Small can of diced chiles  (Optional)

4-5 Good sized, round-ish peppers.  (If doing standing up peppers like shown in the image, they need to have a fairly flat bottom to balance upright in the oven.  If cutting into halves prior to cooking- it doesn’t matter so much.)

Step One:  Brown the ground meat in a frying pan.  (Note: You do not need to add cooking spray or oil if you are using a high fat meat like I did.  Lower fat meats will require a little oil in the pan to keep it moist and prevent sticking.

Step Four: Stir ingredients together in the frying pan until well combined, and simmer for 3 minutes or so. 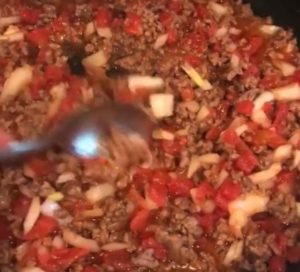 Mind the photo, it’s a screen shot from a video

Step Five: Turn the oven on to 425 degrees -Bake setting.  Rack should be second to lowest probably in the oven.  Or one below the middle.  If that makes more sense.

Step Six:  Add the seasonings of your choice to the Meat mixture and simmer for another 3-5 minutes on low, stirring occasionally to really bring all of the flavors together.

Step Seven:  Turn off the meat mixture, and leave on stove for now. 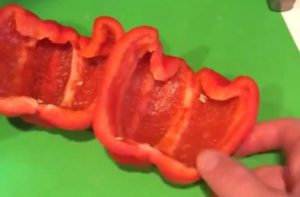 Another option for this recipe, cut into halves

Step Nine:  Line a baking sheet with foil and place the peppers open side down on the foil- spray lightly with cooking spray.

Step Eleven:  Carefully flip and transfer the peppers to a pie dish or square/rectangular baking pan- (Note: I just transferred the foil with the peppers on it then flipped them to re-use the same foil and make for easy clean up.  A pie plate is easier for upright/standing peppers if you chose the hollow out method.  A baking pan that is square or rectangular is fine for open-faced pepper halves, not too deep on the pans which ever you choose.  Also- Be CAREFUL flipping the peppers, they are upside down and most likely full of hot steam underneath use a fork or tongs to flip- NOT your hands.)

Step Twelve:  Transfer meat mixture into the peppers (Note: I did upright, hollowed out peppers as shown in the photo here… I filled them about halfway with meat mixture, then sprinkled about an 1/8 a cup of cheese, then filled them the rest of the way with meat mixture, then another 1/8 cup of cheese.  You don’t need to use cheese if you don’t want to- and you don’t have to do it this way- completely up to you on this step.)

Sorry these photos are a little grainy they are a screen shot from a video, because I didn’t think to take pics during the process.  My bad 🙂

Step Thirteen:  Place Stuffed Peppers in the oven- cook for another 8-10 minutes or until cheese is melted but not burnt of course.  🙂

Step Fourteen: Remove from oven and turn the oven off. 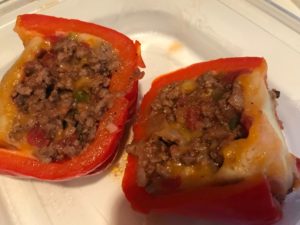 Note:  You can serve these with a little plain greek yogurt or sour cream if you liked them spicy and want to balance them out. 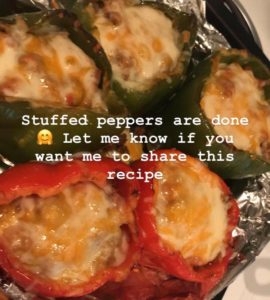 Rachel
View all posts by Rachel →